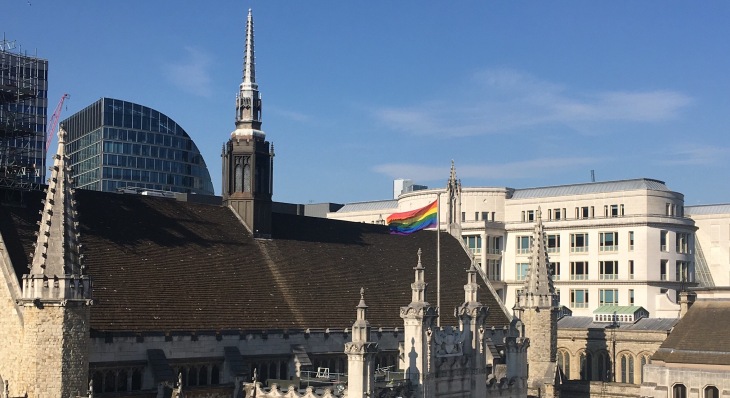 The City of London’s governing Court of Common Council agreed on Thursday 20 July to adopt a motion which means that the LGBT Pride Flag, the Rainbow Flag, will fly above the ancient Guildhall every year to mark Pride week in London.

In proposing the motion, which was signed by 40 elected Members of the City of London Corporation, including two former Lord Mayors, the likely next Lord Mayor, and a current and future Sheriff, I drew attention to why it remains important to mark LGBT Pride on an ongoing basis:

For the first time ever, the Rainbow Flag was raised above this Guildhall and on our iconic Tower Bridge, to mark Lesbian, Gay, Bi and Trans Pride in London.

This was an initiative which was not led by Elected Members, but instead came from a request from our staff, and in particular the members of our recently formed LGBT Network.

In acceding to their request, the Town Clerk and Chief Commoner made a clear declaration that this Corporation is a welcoming employer that values all our staff, recognising their diversity and talents, regardless of their gender identity or sexual orientation.

In raising the Rainbow Flag, we joined Parliament, the Government, Armed Forces, colleagues in Local and Devolved Government around the UK, many foreign Embassies and High Commissions, and countless City employers including Goldman Sachs, JP Morgan, Norton Rose, EY, and Bank of America Merrill Lynch in celebrating LGBT Pride.

And of course, this year has a particular resonance on this issue, as it is fifty years since male homosexuality was decriminalised in Great Britain.

But why, you might ask, is it necessary to continue to mark LGBT Pride each year, surely full legal equality has been achieved. Same sex couples can now marry and adopt children, it is illegal to discriminate against LGBT people in employment or the provision of services, the age of consent has been equalised. What else is there?

Well legislation is only part of the story. Changing the law is one thing. Changing culture, changing hearts and minds, is a different matter. As Stonewall reported in May this year:

And of course, millions of LGBT people around the world face violence and persecution. 73 countries still criminalise same-sex relationships. Most countries do not allow trans people’s gender identity to be recognised.

And this great institution has, in the relatively recent past, had an unenviable track record of conduct which made LGBT people feel unwelcome as Members, officers, or as stakeholders.

No, My Lord Mayor, historically, we have not covered ourselves in any glory in respect of equality and diversity.

But that was then, and this is now.

We have strongly endorsed the power of diversity message of then Lord Mayor Dame Fiona Woolf and her successors.

We have supported our LGBT staff in establishing their network as well as other staff in creating networks for women, disabled staff, carers, black and minority ethnic staff, and those with faith and belief.

And most recently, the Livery has elected our friend and colleague Alderman Tim Hailes as the first openly gay Sheriff of the City of London.

The flying of the rainbow flag My Lord Mayor is a visible sign of our commitment to equality and inclusion. It demonstrates to our own staff and citizens that we value them. It says that we are joining with so many other employers and public authorities in celebrating diversity.

I hope My Lord Mayor that we will seal that commitment by supporting this motion today.

The motion was carried nem con, with no Member voting against.

Deputy Edward Lord OBE is the Deputy Chairman of the City of London’s senior Establishment Committee, which is responsible for human resources, establishment, and equalities matters throughout the City of London Corporation, including negotiations with the recognised trade unions. In addition it is the service committee for Town Clerk & Chief Executive’s Department and Comptroller and City Solicitor’s Department.