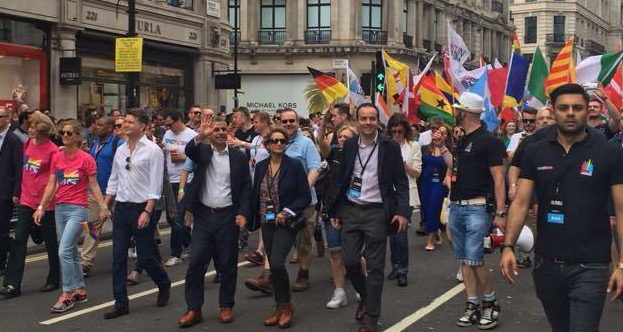 Today is Pride in London, the United Kingdom’s largest gathering of Lesbian, Gay, Bi, Trans, and Queer people together with their allies and friends and others whose life, love, or identity is marked in some way by difference. For me and for many it is a day of great celebration for the achievements of equality and the recognition and contribution of LGBTQ+ people. However it is also tinged with sadness not only for the challenges at home and overseas still faced by many LGBTQ+ people, but also for those people Pride alienates, or doesn’t represent or include.

I first attended Pride in London 25 years ago, and have been an organiser in London and Manchester several times over that period. I am now deputy chair of Pride in London’s Community Advisory Board, which advises the Pride directors and scrutinises their decisions. It provides guidance on inclusion, governance and other operational issues, and reviews each year’s Pride in London events.

To my mind, the current Pride in London team, led by Michael Salter-Church and Alison Camps, who took over responsibility for the event in 2013, are by far the most effective and competent organisers in many years. They have built a huge event with a recognised brand which is becoming financially self sustaining. They have done so by being relentlessly mainstream, and have developed a marketing and sponsorship approach which has been not only commercially successful, but has widened the audience and recognition for Pride.

Unfortunately, by being so mainstream, many in LGBTQ+ communities feel left behind by Pride in London.

For some the event has lost its political edge or purpose. There is still so much to protest and campaign about. Bullying and violence against LGBTQ+ people remains intolerably high; health outcomes (especially mental health) for LGBTQ+ people are terrifyingly poor; criminalisation of LGBTQ+ people occurs in 70 countries around the world. All of these things show clearly that we still have a long way to go.

Other people find the unrelenting commercialism of Pride difficult to swallow. They accuse the organisers of permitting companies of pink/rainbow-washing their profits with a bit of Pride glitter, whilst treating their employees, customers, suppliers, and/or the environment badly. However it is complex. Corporate involvement in Pride also has the benefit that their financial support allows the event to happen on the scale that it does. Also most corporate entries in the Pride parade are for their LGBTQ+ staff and their allies to come together and demonstrate that at work they are equal and respected.

As a bi person, I find it incredible that the organisers thought that it was in any way acceptable for this year’s Parade not to have a bi section. The Pride directors’ one size fits all approach whereby organised groups have to register and pay in order to take part (which is the only way people can join the parade), neglects to take into account that some communities don’t have co-ordinated groups with elected officers and bank accounts, and that some feel so marginalised by Pride that this is a real struggle for them in any event.

I reflected on the history of bi participation in Pride in an email to the Co-Chairs last month:

It is now 21 years since London Lesbian & Gay Pride became London LGBT Pride. I know this because I was a member of the Pride Trust Board in 1996 when the decision was made to include bi and trans people in the event title. This was not a harmonious decision and attracted much negative comment from within the lesbian and gay community about involving ‘minority interests’.
Since that time, it has become widely acknowledged that bi people make up the largest group within the LGBT community (see: San Francisco Human Rights Commission’s 2011 report Bisexual Invisibility: Impacts and Recommendations, “self-identified bisexuals make up the largest single population within the LGBT community”).
However, despite the proportion of LGBT people who identify as bi (and the even larger numbers of people whose behaviour or attractions could best be described as bisexual: over 40% of young people according to the latest YouGov survey), many bi people feel marginalised within the wider LGBT community. The organised bi community itself is small and led by a tiny number of volunteers. Virtually no bi organisations are formally constituted with elected officers or bank accounts.
Despite the passage of time, and perhaps because of that marginalisation and the lack of bi specific organisations, many bi and queer identified people still do not feel comfortable at Pride or that Pride is for them. Even in recent years, participants in the bi group in the London Parade have remarked that they have witnessed or been subject to specifically biphobic abuse from lesbian and gay participants and bystanders, such as people singing ‘making your mind up’ or ceasing cheering as the bi group walks past (this was described particularly well in this comic strip by a bi activist: http://empathizethis.com/stories/prejudice-pride/)
In the wider Pride context, outside London, it is not that many years since Manchester Pride took no action when bi activists complained about retailers in the Manchester Gay Village street market selling t-shirts with openly biphobic slogans on them.
Beyond Pride, there remains clear and present biphobia in lesbian and gay communities with high profile activists and ‘celebrities’ denying the existence of bisexuality or condemning bi people. Indeed, it is less than a year since Christopher Biggins made his extraordinary biphobic outburst on Celebrity Big Brother, repeating that oft-heard mantra that bisexuals are “people not wanting to admit they are gay” and that we should just “pick a team”.
It is against this kind of background that there is a clear reticence amongst some bi people to attend Pride, certainly in an identifiable bi group rather than as part of a larger LGBT employee network, sports club, union, or political group. This fact is obvious from the figures which we see in the annual participants survey, where the percentage of bi people who have attended Pride is considerably below the proportion of bi people in the general population.

And it is not just bi people who have issues with Pride. Prominent lesbians, amongst them the fabulous Stonewall Chief Executive Ruth Hunt, were yesterday calling out the lack of women at Pride related events. I supported her by tweeting that it is fundamentally wrong in the LGBTQ+ community and beyond to have exclusively male panels/events.

Black, Asian, and Minority Ethnic people continue to find Pride in London alienating space, with only 10% of 2016 participants being BAME, despite London’s BAME population being around 40%.

Trans people, older people, people of faith or belief, also are under-represented at Pride in London.

Whilst I remain convinced that Pride as a concept is a wonderful and empowering event, we must surely be able to find a way of making it more inclusive and welcoming to all in our communities. If not, we risk a schism in Pride, with the mainstream normative gays and their straight allies going one way, and lesbians, bi people, trans people, people of colour, others of difference going in a different direction.

I would be very sad if that happened.

Let’s hope that, today at least, we can come together and have a happy Pride.