Writing a post like this is liable to inflame some of my fellow Liberal Democrats and other friends who simply dislike Tories, but the results of Thursday’s elections to the Scottish Parliament  deserve comment, not least because of the extraordinary revival of the Scottish Conservatives under their leader Ruth Davidson. I am proud and fortunate to… END_OF_DOCUMENT_TOKEN_TO_BE_REPLACED 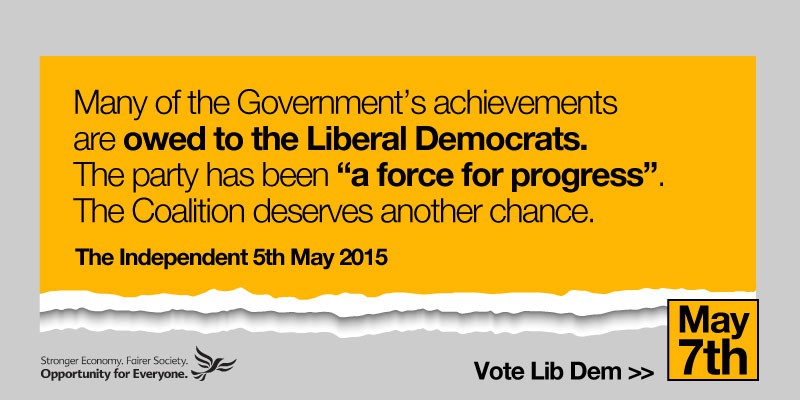 My last two election blog posts have tried to retain a certain degree of party neutrality, looking dispassionately at the likely outcomes in marginal seats and wishing candidates of all parties the best of luck. But now, with less than twenty four hours until the polling stations are open, is the time to be clear as… END_OF_DOCUMENT_TOKEN_TO_BE_REPLACED

With three days to go until polling day in what is likely to be the tightest and most unpredictable election in living memory, my thoughts go out to all candidates and their campaign teams as they approach the big day. They also extend to the electors, especially in highly marginal constituencies, who will have been bombarded… END_OF_DOCUMENT_TOKEN_TO_BE_REPLACED

Because of my well known interest in all things political, one of the most frequent questions I am asked these days is “What do you think will happen in the election?”. My general response up until now has been the psephological equivalent of sticking my finger in the air to guess which way the wind was… END_OF_DOCUMENT_TOKEN_TO_BE_REPLACED

Yesterday evening, my partner and I watched the 2008 film Milk, which tells the story of the political career of San Francisco City Supervisor Harvey Milk, America’s first openly gay elected public official. Milk was an inspirational figure who overcame prejudice and even violence during his campaigns to be elected, but was ultimately assassinated in… END_OF_DOCUMENT_TOKEN_TO_BE_REPLACED

Simon Clark’s Bloomberg article “Sexism in the City of London as men rule in elections” (http://www.bloomberg.com/news/2013-03-25/sexism-in-the-city-of-london-as-men-rule-in-elections.html) draws out a number of crucial issues for the Corporation to tackle as the Council starts a new four year term. Clark’s core point about the gender imbalance of the City’s corporate nominee electors is absolutely valid. As he… END_OF_DOCUMENT_TOKEN_TO_BE_REPLACED

This year’s City of London elections have been the hardest fought in living memory with 21 out of the 25 Wards being contested by over 150 candidates. The polls took place on March 21st and the results are now in. In my own Ward, I and two of my One Farringdon team colleagues – Wendy Mead… END_OF_DOCUMENT_TOKEN_TO_BE_REPLACED

It is but a few days now until polling day for the City of London common council elections on Thursday 21 March and I seem to be spending most of my waking hours sticking labels, stuffing envelopes and delivering them around the ward of Farringdon Without. On Thursday evening a team of us stuffed (and… END_OF_DOCUMENT_TOKEN_TO_BE_REPLACED