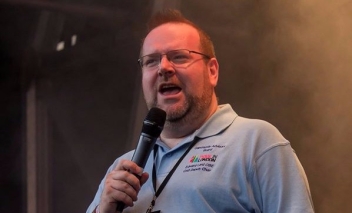 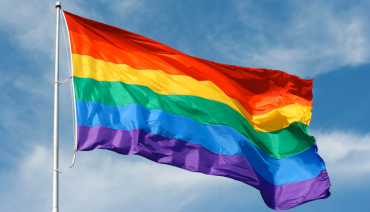 A lot has been said, including by many of my friends, about the incursion by a tiny group of Trans Exclusionary Radical Feminists (TERFs) at the start of Saturday’s Pride in London parade route, and about the apparent failure of the Pride organisers to remove them and to protect trans attendees from seeing their message of prejudice and hate,

And let me be quite clear, the message of those eight individuals who claimed to represent a ‘silenced majority’ of lesbians who want to #GettheLOut of the LGBT community saying that they feel oppressed by trans women, is nothing short of man-hating, trans-hating bigoted bunkum. The #LwiththeT social media backlash of many hundreds of lesbians standing proudly alongside their trans siblings has put the lie to the TERF claim that they represent anyone other than their own unpleasant selves.

I write as a former Pride Trust Board member who helped organise the march and Clapham Common festival in 1996, which attracted over 250,000 people. I am also a former leading member of Pride in London’s Community Advisory Board, which was so critical of Pride last year. I am also a senior Justice of the Peace who presides in central London’s magistrates’ courts and who has heard many hundreds of public order cases in the sixteen years since I was first appointed.

Let’s look at the facts

I have watched Pink News‘ video of the TERF incursion from start to finish. I have also read countless contemporaneous accounts of what took place and read the statement issued by the Pride in London board.

Just before the parade was due to start, a group of eight individuals, none of whom were registered participants, pushed in to the front of the parade and stood on the giant rainbow flag. They were carrying placards which proclaimed “Lesbian Not Queer”, “Lesbian = Female Homosexual”, and “Transactivism erases Lesbians”. They had leaflets headed “Get the L Out” making bold anti-trans statements and opposing proposed changes to the Gender Recognition Act.

Pride organisers, stewards and paid security moved in and initially succeeded in removing them from the rainbow flag.  The individuals moved forward and then placed themselves on the ground to form an obstacle to the parade starting. Then, after some negotiation, they got up and were permitted to march, not at the front of the parade, but ahead of it, and separately from it.

Those are the facts, and they are, as I see it, undisputed.

But given those facts, could the Pride organisers have acted differently? Could they have sought to stop or remove the TERF protesters? Could they have prevented them entering the parade route to begin with?

In my view the answer to all these questions is no.

The organisers of Pride are facilitators of the event. They put in place the necessary arrangements to allow it happen safely including security staff, stewards, barriers, and logistical support. Pride organisers, and their volunteers and paid contractors, have no enforcement powers to make people do (or not do) anything, especially if those people are not signed-up participants who have contractually accepted that they will follow Pride’s code of conduct. They can simply encourage good behaviour, and, ask people to follow the directions of the stewards.

In this case, the organisers clearly took immediate steps to try and dissuade the protesters from their behaviour, but as is so often the way with those holding extreme views, the encouragement (which was the only thing the Pride organisers could legally  do) was not going to move them from their chosen course of action.

What the Pride organisers did do, in my opinion correctly, was to balance their desire to remove the protesters and their abhorrent messages with the need to safely begin the parade, being mindful of the health of the 30,000 registered participants, many of whom had been waiting for several hours in Portland Place in the baking sun.

If the protesters would not voluntarily leave the parade route, other than by walking along the route to its end in Whitehall, then allowing them to do that, significantly in front of the official head of the parade, was the only safe thing to do.  By doing that, it hopefully made clear to those watching from the sidelines that the TERF protesters were not formally part of the parade.

So why didn’t the police do anything about it?

Of course, there was a sizeable police presence along the parade route and elsewhere in central London on Pride day, including near the the location of the incursion, they did not however intervene. Policing of well planned celebratory events like Pride tends to be ‘soft touch’ and officers will generally not interfere unless they see or suspect that a criminal offence has been committed.

In this instance, the protesters seem to have been very careful to stay just on the right side of the law. From what I saw of the signs they held, the words they chanted, and the text of their leaflet, the only offence which they may have committed was a breach of section 5 of the Public Order Act, which states that:

A person is guilty of an offence if he (sic)—

(b) displays any writing, sign or other visible representation which is threatening or abusive,

within the hearing or sight of a person likely to be caused harassment, alarm or distress thereby.

which is amongst least serious category of offences in English criminal law and is punishable only by a low level fine. Most police forces now rarely arrest for disorderly behaviour offences unless they are racially or religiously aggravated, and the Crown Prosecution Service charging advice is such that they probably wouldn’t be brought to court even if arrested.

One friend, an experienced barrister, questioned whether the incursion onto the parade  route might constitute an aggravated trespass, contrary to section 68 of the Criminal Justice and Public Order Act 1994, which provides that:

A person commits the offence of aggravated trespass if he (sic) trespasses on land and, in relation to any lawful activity which persons are engaging in or are about to engage in on that or adjoining land, does there anything which is intended by him (sic) to have the effect—

(b) of obstructing that activity, or

(c) of disrupting that activity.

On the face of it, this offence could be made out in respect of the protesters’ behaviour, but for the fact that it expressly excludes conduct on a highway. Even if it did apply to these circumstances, it is in any event not an offence where a constable may arrest a suspect without a warrant.

So, in essence, there was also little the police could have done either, other than again gently encourage the protesters to leave the route, which they showed no willingness to do. Of course, a senior officer could have conjured up some reason for arresting them, but I suspect the Metropolitan Police Commissioner would not easily have forgiven one of her subordinates for allowing the unedifying spectacle of eight middle-aged women being dragged off the streets in handcuffs in the full glare of the media and social media.

Like most right thinking queer folk, I was sickened by the behaviour of the TERF protesters on Saturday. I was angered by their message of hatred and bigotry. I felt defensive towards my trans siblings who were subjected to the hideous messages of those who wish to exclude them and deny both their existence and their right to live amongst our communities.

I know with the benefit of hindsight it is easy to condemn those who made the decision to allow the protesters to march, but ask yourself, honestly, what would you have done?

This was not the first time that there has been an incursion into the Pride parade. UKIP did it in 2015. And last year an anti-capitalist bloc invaded the start of the parade almost mirroring what the TERFs did this year. They were also allowed to march ahead of the main parade, again separate from it. It is perhaps interesting that some of those who have been so fast to condemn the Pride in London board for their actions this year were notable by their silence last year. Of course, the politics of the protesters, and the language they used, were radically different, but the factual circumstances were the same – both sought to disrupt Pride. So please, let us not be hypocrites in our criticism of Pride organisers.

Edward Lord OBE JP served on Pride in London’s Community Advisory Board from 2015 to 2018 and acted as chair on a number of occasions during that period. They were also a member of the Pride Trust board in 1996, are a former chair of the Albert Kennedy Trust, a Bi UK trustee, and one of Stonewall’s first Role Models. Edward is a councillor in the City of London where he leads on workforce and inclusion policy and is a magistrate, currently serving as deputy chair of the Central London Local Justice Area.

2 thoughts on “In defence of @PrideinLondon organisers: hateful #TERFs put them in an impossible position, and the @MetPoliceUK were powerless to help.”